Remembering the Holocaust: Courage and Resiliency as told by the Child of Two Survivors

January 27th is recognized as International Holocaust Remembrance Day, marking the date that the infamous Auschwitz death camp was liberated near the end of World War II. This day is dedicated to the Holocaust survivors as well as the 6 million Jews and countless other millions of innocent people who were killed during World War II by the Nazi regime. It also strives to ensure that another Holocaust never occurs.

Both of my parents survived the Holocaust. Like most survivors, they survived due to a combination of courage, resourcefulness and luck.

In late 1942, while my father’s family was in the ghetto in Bochnia, Poland, the Nazis told the leader of the Jewish community to pick 150 people to stay in the ghetto; the remaining residents were to be shipped off to concentration camps. My father’s family knew the leader and asked to be on the protected list. However, it turned out that a total of 250 people were granted protection. This infuriated the Nazi leader, who immediately grabbed 100 people, including my father’s mother, and shot them in front of the entire community. My father and other local teenagers were then forced to collect the bodies and place them in a pile to be burned. He tried to pull his mother’s body aside to later give her a decent burial. However, a Nazi soldier spotted him and hit him over his head with the butt of his rifle, screaming “filthy Jew.” 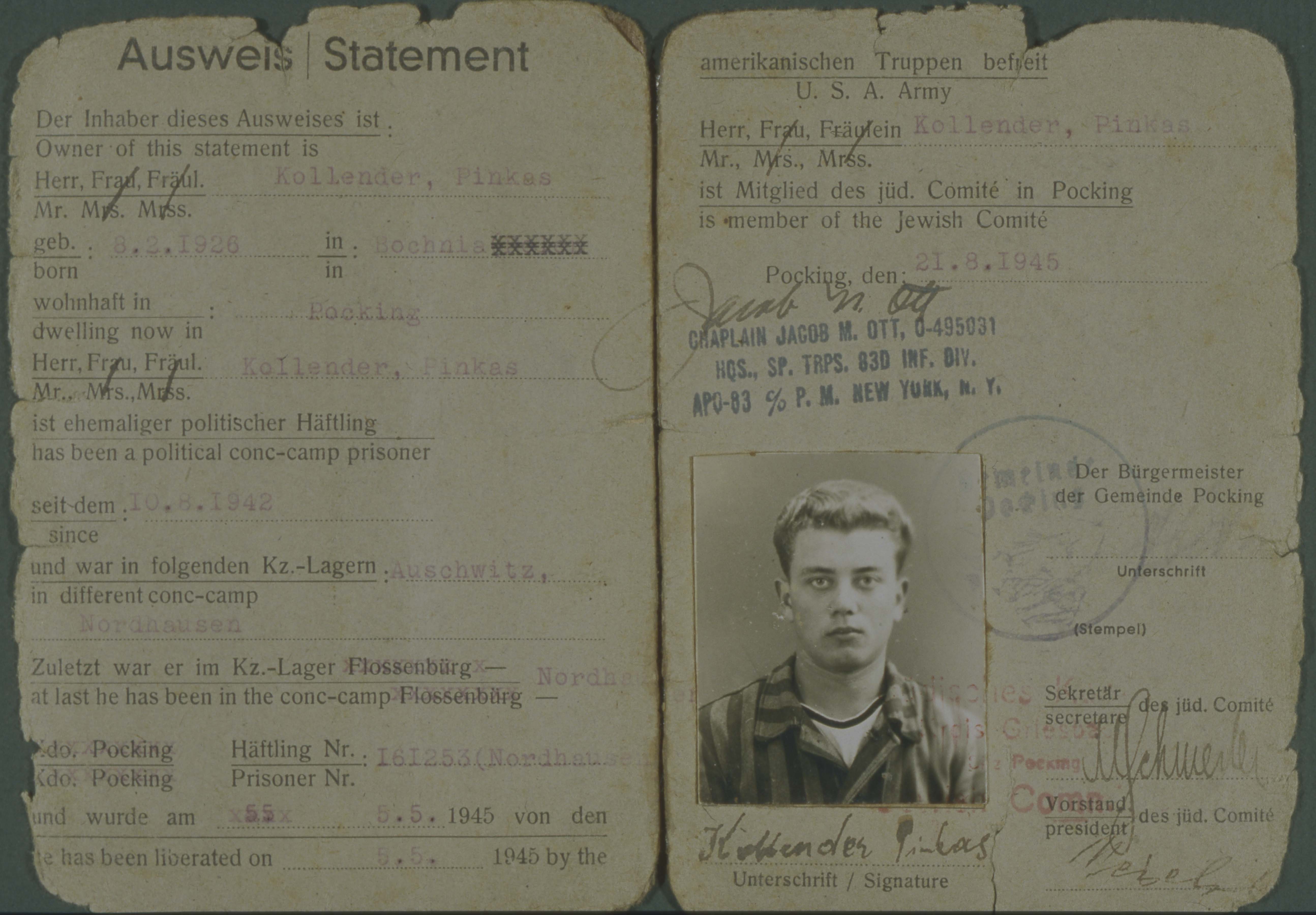 At Auschwitz, my father was seriously injured when the camp was bombed by an American fighter plane. For some reason, he was placed in the infirmary, probably for public relations purposes, as the Germans told the visiting Red Cross representatives that he was wounded when the Americans bombed a “prisoner of war” camp. Luckily, the doctor assigned to him was from his hometown, and nursed him back to health. During his recuperation, the doctor released him, despite my father’s insistence that he was not yet healthy. My father found out the next day why he was released, when the Nazis came into the infirmary and murdered all the remaining patients (in a scene similar to one in Schindler’s List).

In January, 1945, the Germans, realizing the Allied forces were closing in, took my father and an estimated 60,000 Auschwitz prisoners on a “Death March” for over 35 miles in the cold and snow. During the march, my father’s brother attempted to escape and presumably was shot. Later in the march, my father collapsed from starvation and pain; an elderly prisoner picked him up and scolded him “you are young, keep walking, you need to survive.”

In April, 1945, my father and many other prisoners were placed on a train to take them further away from the oncoming Allied forces. During the ride, an American fighter plane shot at the train, at which point my father jumped off the train and ran, despite bullets flying all around him. After a few miles, he and another escapee stopped at the house of a Czechoslovakian farmer and explained their situation. The farmer, risking his life, dug a foxhole for the two escapees to hide, and fed them. Unfortunately, he fed them too well, as my father got very sick, having not eaten real food in more than two years. The farmer went into town on his horse and buggy in the middle of the night, and brought a doctor back to the farm. The doctor, also risking his life, saved my father’s life. After 16 days of hiding in the foxhole, and being fed by the farmer, the war ended and my father was a free man, the only survivor of his extended family. My father never forgot the extreme kindness and bravery of the farmer, referring to him as an “angel from heaven.”

It was as if my father was destined to live. You could even see this with the identification number brutally tattooed on his arm by the Nazis - 161253. These six numbers added together equal 18, the Jewish number for “chai” or life. 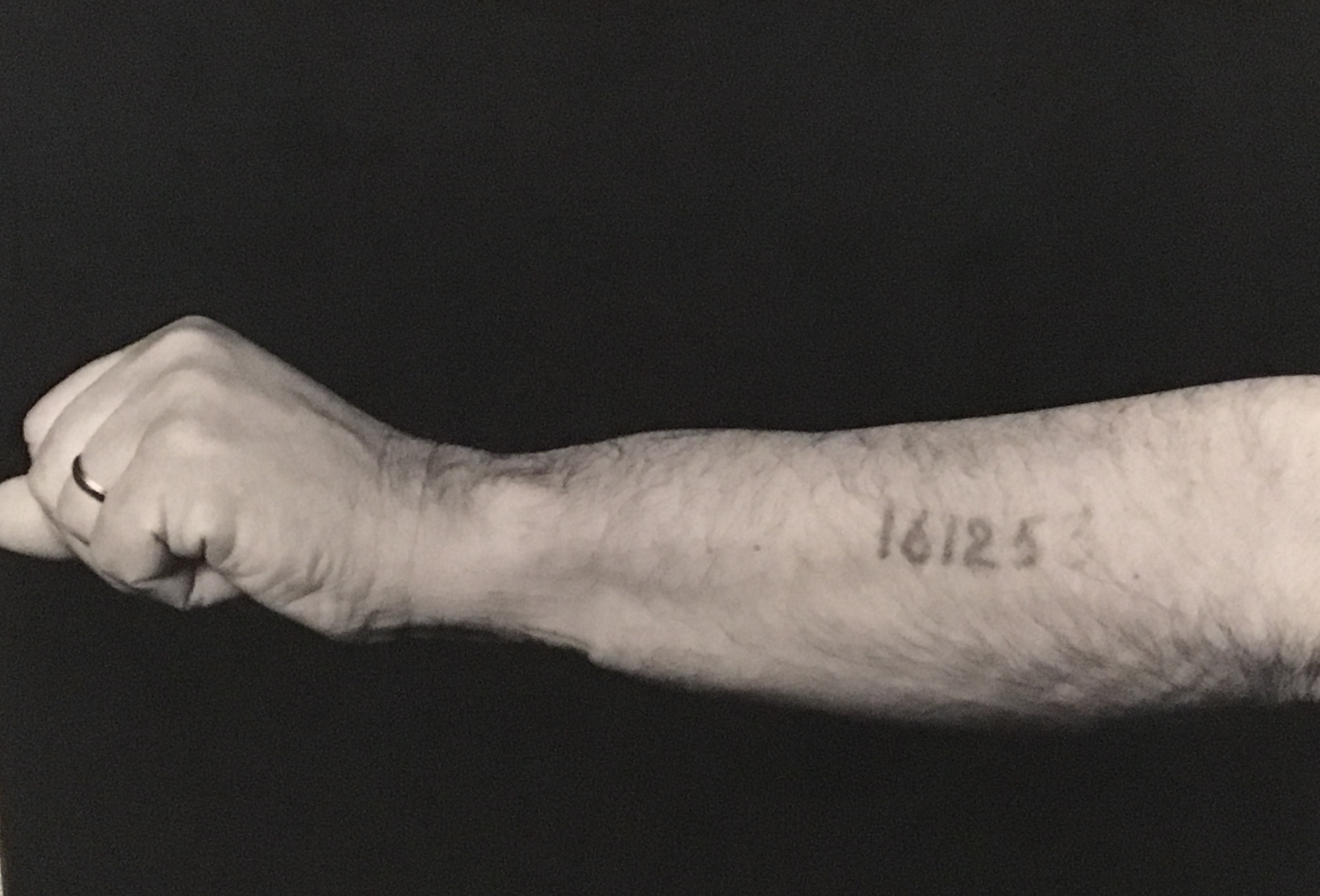 Pincus Kolender - Identification number branded on him in Auschwitz

My mother and her mother were slave laborers in a munitions factory in Czestochowa, Poland. For their daily work, they were given red crayons (to be used as markers for the ammunition) and rubber gloves, which they would keep at the end of the day. On occasion, the camp doctors would examine the prisoners, with those prisoners deemed unhealthy to be sent to their deaths. On those days, my mother and her mother would use the crayons both as lipstick and to add color to their faces, and use the gloves as bows for their hair, to brighten their appearance and make them appear healthier.

They also dressed my mother’s brother (who was only 9 years old) as a girl, to allow him to stay in their camp. Otherwise, he would have been separated from them, and surely sent to his death. If my mother and grandmother’s ploy had been discovered, they would have been shot immediately. My mother and her brother were liberated by American soldiers in 1945; unfortunately, my mother’s mother died shortly before the end of the war. In 1947, she accompanied her then 12 year old brother on a boat to Ellis Island to start their new life in America.

After the war, my parents met and married in Charleston, S.C., and had three children and six grandchildren. That, they said, was their biggest victory. They survived and flourished, and the Nazis are but a horrific historical footnote. 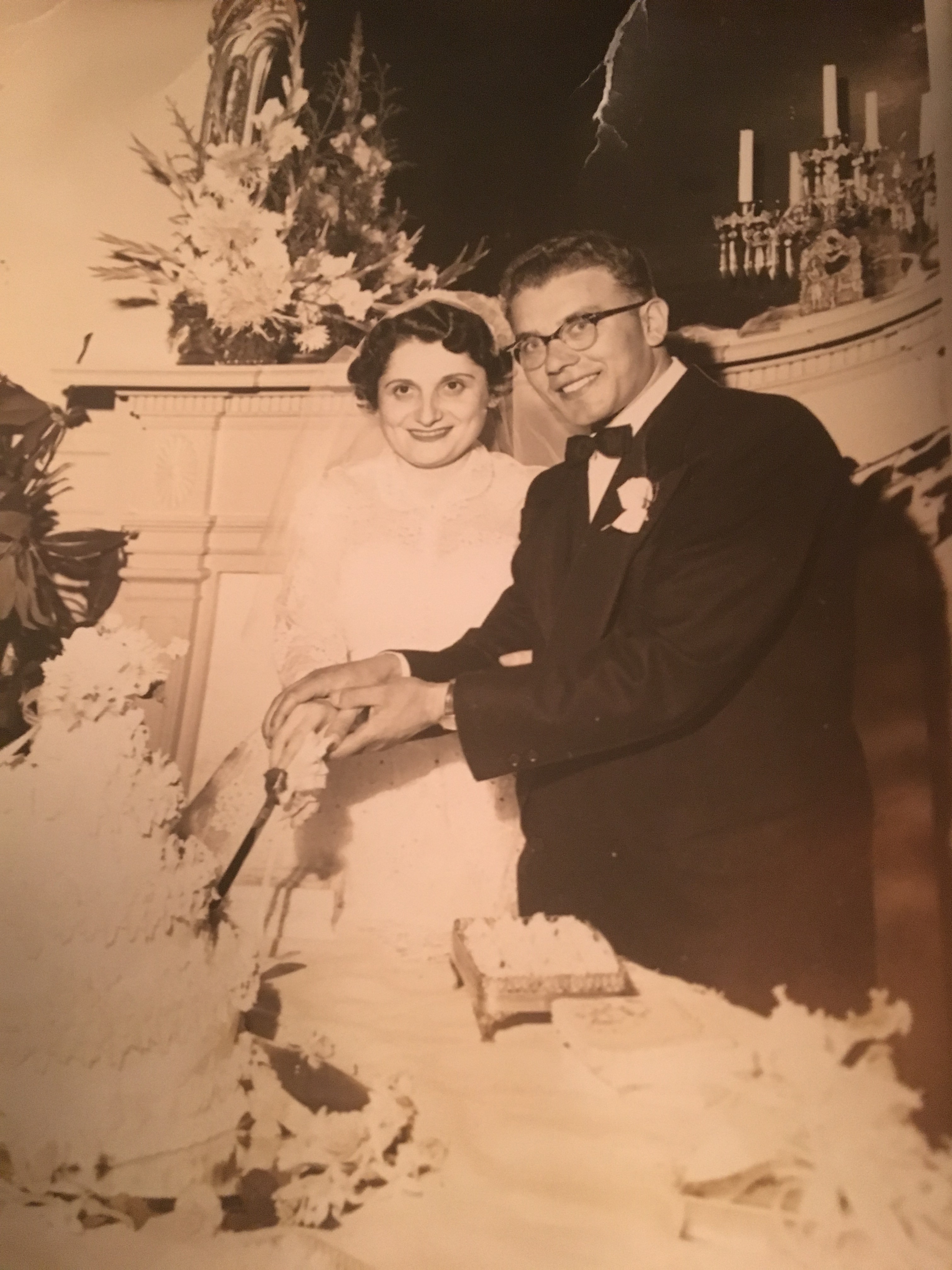 Renee and Pincus Kolender on their wedding day - 1953

At first, it was difficult for my parents to tell these stories. They had lost everything – family, friends, livelihoods and homes, and were busy trying to rebuild their lives. Over time, things seemed to change. The survivors were now recognized for their courage, ingenuity, overwhelming desire to live, and ability to overcome the odds and lead lives of dignity.

Then, in 1987, in a trip that in many ways was my own personal “Roots,” I went on an emotional trip to Poland with my parents and sister, along with some other relatives. It was on that trip that I learned many things about my parents’ past, most notably how my grandparents, aunts and uncles were killed. After all these years, my parents were able to find some peace and recite Kaddish (the Jewish prayer for deceased family members) for their parents, which they were unable to do at the time their parents were so brutally murdered. 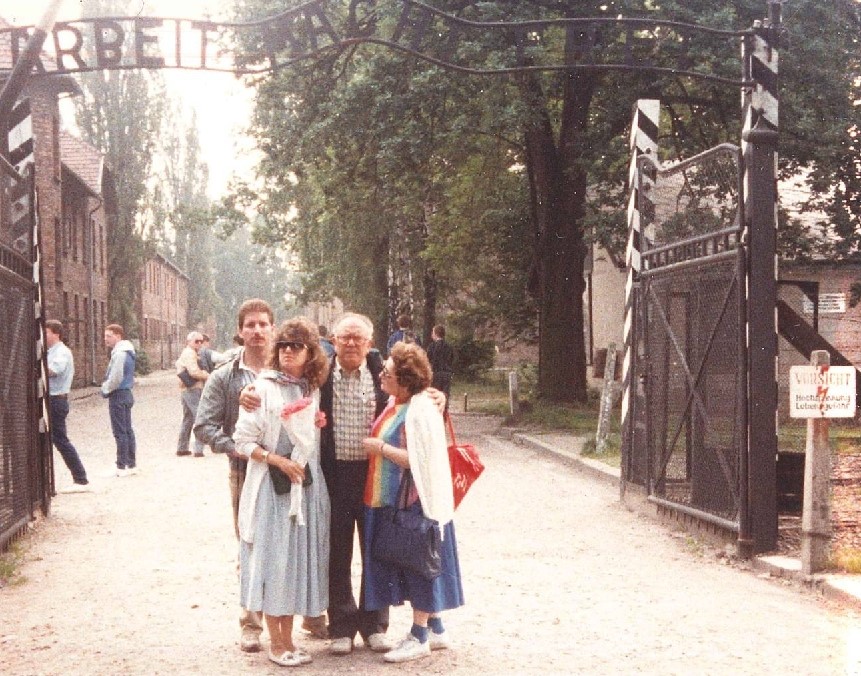 Kolender Family at the entrance to Auschwitz - 1987 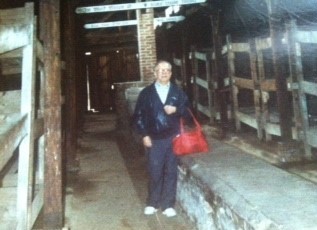 Pincus visiting the barracks where he was held - 1987

The trip to Poland seemed to open something up in my father as he, along with his good friend and fellow Auschwitz survivor Joe Engel, started to speak publicly about their experiences. He probably spoke to more than 100,000 people in schools, churches, and other community gatherings, warning of the dangers of hatred. While having to constantly recall his experiences often resulted in nightmares, he realized that may have been the reason he survived -- to speak about his experiences and try to prevent another Holocaust. He spoke not of revenge or animosity, but of the need to judge people by their character, and not by their religion, color or background. This is a lesson that unfortunately is still very relevant.

In 2000, my father returned to Poland, going with my sister to the “March of the Living,” an annual event where survivors travel with teenagers to concentration camps and discuss their experiences during the war. It was during this trip that my sister met her future husband. Quite an ironic twist, the place where my father lost his entire family gave him a son-in-law and eventually two grandchildren.

Later, my children were on school trips to Poland learning about the history, tradition and culture of the Jews in Poland. They were able to visit Auschwitz, and see the group of barracks in which their grandfather was imprisoned. I know my parents (although no longer with us) are extremely proud that their grandchildren visited, with pride and in freedom, the place where they and so many others suffered so greatly solely because of their religion. Where two generations ago, my parents lived through perhaps the darkest moment in modern civilization, my children instead marched triumphantly on those same grounds with their friends. 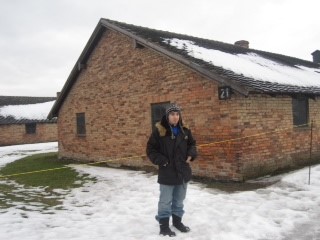 Daniel Kolender, Jeffrey's son and Pincus' grandson, in front of one of the Auschwitz barracks - 2010 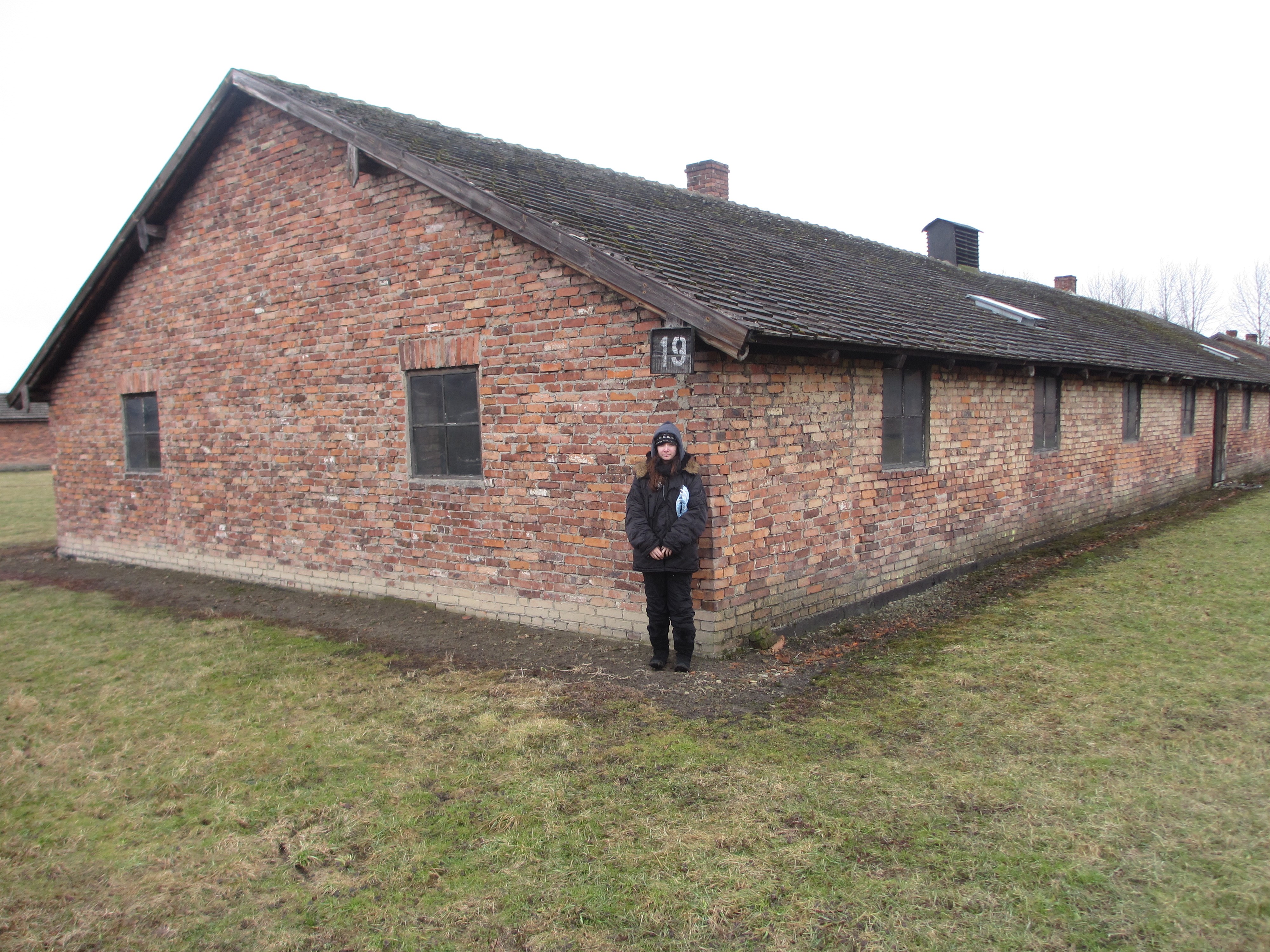 Elise Kolender, Jeffrey's daughter and Pincus' granddaughter, in front of another of the Auschwitz barracks - 2013

Somehow, despite their experiences, my parents thought life was good. They were tough and resilient, but at the same time extremely kind and generous. They carried themselves with great dignity, but greater humor. My siblings and I were taught compassion, the importance of family, the need for faith and honesty, and most importantly, the power of optimism. As my father always said – every day is a new day, and be grateful for what you have, whether it is a comfortable bed, a warm meal, or the love of family and friends.

Jeffrey Kolender, chair of the firm's Estate Planning and Estate & Trust Administration practice groups, wrote this piece in observance of International Holocaust Remembrance Day. This year marks the 75th anniversary of the liberation of Auschwitz.