Cities, counties, and states have been suing fossil fuel companies to pay for the costs to mitigate and remediate the effects of climate change. Paley Rothman attorneys, Cristen Rose and Robert Shulman, say energy companies should look to the insurance industry as an example of how to avoid potential pitfalls involving language use and perceptions.

“Over the past few years a wave of lawsuits has sought to hold fossil fuel companies responsible for the societal costs associated with climate change.

For the most part, these lawsuits have been brought by cities, counties, and one state in which the plaintiffs have pressed novel claims of public nuisance and other state laws arguing the fossil fuel companies should pay for costs associated with, among other things, infrastructure projects undertaken to mitigate and remediate the effects of climate change.

To date, the disputes have mostly centered on whether they will be litigated in state or federal court, although discovery is ongoing in some of the remanded state court cases.

In contesting jurisdiction, parties in climate change litigation have used a number of characterizations purporting to describe the nature of the dispute. The insurance industry may take these neutral characterizations crafted for descriptive purposes only out of context in the inevitable contest over coverage.

This is not speculation: the insurance industry already has argued that climate change is an uninsurable risk that existing polices supposedly were never intended to cover.

In short, words and perceptions matter. Energy companies can, and should, harmonize a neutral narrative that sets out the nature of the underlying claims with their insurance story. Such a narrative should take account of potential pitfalls in using certain terminology to avoid manipulation in the context of insurance coverage.

Prophylactic Measures and Abatement v. Mitigation and Remediation
General liability insurance policies cover damages because of property damage. So-called pure prophylactic measures that are solely designed to mitigate future damage may not be covered in the absence of concurrent, pre-existing injury or damage. Costs associated with mitigation to prevent further damage is covered.

The underlying climate litigation has been described in various pleadings and opinions as involving “costs of infrastructure projects undertaken to mitigate climate changes effects.” As written, this could be mischaracterized as prophylactic-only in nature which, in turn, allows the insurance industry to contend that such costs are not covered.

At their core, the allegations of climate change as expressed in the various state law causes of action presuppose or are predicated on the existence of property damage. Although the cases may seek to mitigate or prevent further property damage, those mitigation costs are damages and should not be conflated with the alleged pre-existing property damage.

Moreover, the cases necessarily seek damages connected to remediation which targets the alleged pre-existing damage. “Climate change effects” also should be understood to conform with the alleged pre- existing property damage. So, with some additional precision, the infrastructure projects can be set out as covered damages because of property damage.

The pleadings and opinions in the underlying climate change litigation also have addressed the issue of whether the energy companies can be required to spend billions of dollars on abatement. Abatement is somewhat synonymous with mitigation and routinely co-exists with the concept of public nuisance. For insurance purposes the so-called abatement should be linked, at least in part, to the reduction or remediation of alleged pre-existing property damage.

The concept of emissions also is a predicate allegation in the underlying litigation. Taken out of context, emissions raise the specter of pollution. The carriers will automatically default to pollution exclusions to seek to defeat coverage.

For example, The City of New York case (City of New York v. BP PLC, 325 F. Supp. 3rd 466 (S.D.N.Y. 2018), appeal docketed, No. 18-2188 (2nd Cir. 2018)); focused on allegations relating to domestic and extraterritorial emissions and that court’s characterization that “widespread global dispersal [of greenhouse gases] is exactly the type of ‘transboundary pollution suit’ to which federal common law should apply.” It is here that the insurance industry will vigorously seek to deny coverage on the basis of pollution exclusions.

The energy companies can once again contextualize the true nature of the underlying disputes to neutralize arguments about pollution exclusions. To that end, the climate change actions are more accurately described as product liability cases and are not within the intended reach of pollution exclusions. The Bermuda form, a policy form that is prevalent in energy companies’ portfolio addresses the product/pollution tension through various product pollution provisions. In the context of MTBE, those provisions were deemed to provide coverage. The same result should occur in the context of climate change.

In the absence of product pollution provisions, allegations of climate change are not fairly analogous to environmental contamination in any event; a more accurate understanding of pollution. Although we can create narratives where the emissions of fossil fuel are tied to everyday notions of pollution that simply is not the target of the climate change litigation. Indeed, the so-called infrastructure projects are not based on cleanup of contamination.

The climate change litigation is about “production and sale of fossil fuel products…”; i.e., product liability. In turn, the focus of the underlying litigation is again not about cleaning up environmental contamination or harm but, instead, redressing property damage that allegedly has, and will continue, to occur.

Knowing that the insurance industry will seek to recast the import of the underlying litigation, simple fixes can be inserted to protect the factual and litigation narratives for insurance purposes without doing any injustice to the defense of the underlying claims themselves. There is no question that with billions of dollars of exposure the insurance industry will vigorously contest coverage.

As noted above, we’ve already seen the insurance industry posit that climate change is an uninsurable risk that was never intended to be covered by existing liability policies. It is prudent that energy companies harmonize their defense story with the insurance story in order to preserve perceptions that are in line with reality. It can be done with some foresight and care.” 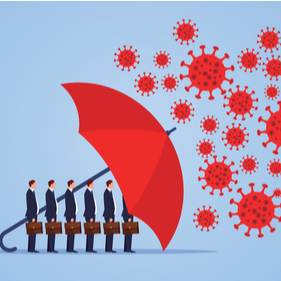 Under Virginia’s new Emergency Temporary Standard, employers of all sizes will need to comply with mandated workplace safety measures designed to prevent the spread of...