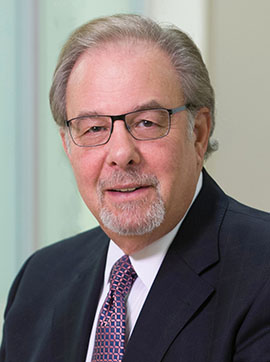 “Addressing the unique challenges of each business transaction, whether it involves one billion dollars or hundreds of thousands, I focus on my client’s business objectives, identify and evaluate appropriate structuring alternatives and negotiate and implement transaction documents which provide an effective means of achieving those objectives.”


Alan Mark is a Co-Chair of the firm’s Real Estate and Chair of the Financial Services practice groups. He is also a senior member of the Corporate group. For more than 40 years, Alan has concentrated on corporate, commercial and real estate finance matters. He has served as outside counsel to numerous local, regional and national financial institutions, publicly traded biotechnology companies and hotel owners and operators. He has also served as outside counsel to information and telecommunication technology clients, government entities and individuals in connection with technology transfers, business acquisitions, project development and equity and debt financings. Since 1996, Alan has overseen more than $1 billion of structured lease financing transactions for the acquisition and development of nearly 2 million square feet of biotechnology research and development facilities and cGMP pharmaceutical manufacturing facilities. In 2006, he was lead counsel for the seller/lessee in what is believed to have been one of the largest private real estate transactions in the State of Maryland, to that point in time.

Alan is a member of the Maryland and District of Columbia bars. Between 1987 and 1998 he was an Adjunct Professor of Law at Georgetown University Law School and has been an Adjunct Professor of Law at American University’s Washington College of Law since 1992, where he has taught real estate finance and development. Alan serves on the Montgomery County Advisory Board of Branch Banking & Trust Company (BB&T - 2006-present) and formerly on the Strategic Council of the Children’s Hospital National Medical Center in Washington, D.C. (2008-2013) and has been profiled in Who’s Who in America. Alan was selected by his peers for inclusion in Best Lawyers in America (2014-present) for Real Estate Law.